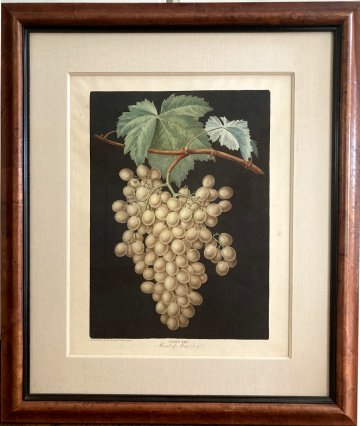 It is not just the significant historical value of the plates that make them so desirable, but their inherent beauty! Brookshaw’s fruit “portraits” are shown in their natural size, in artistic groupings, with a naturalness that had not been seen. These fruits proudly sport brown spots, worm holes, and curled dry leaves. For today’s audience, Brookshaw’s fruits are a marvel, they are timeless, seemingly contemporary and modern as they float upon the page.

Muscat of Alexandria is a variety commonly used in the production of French vin doux naturel, but it is also found in Spain where it is used to make many of the fortified Spanish Moscatels. We are pleased to offer such wonderful examples of English Georgian artistry.