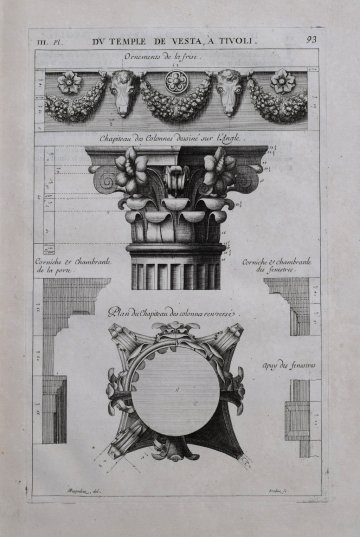 “Antoine Babuty Desgodetz (1653-1728), a young trained French architect was commissioned by Jean-Baptist Colbert, the King’s minister of finance, to travel to Rome to study the Roman ruins in order to produce an architectural source book for French practitioners. He returned to Paris in 1677 with the first really accurate drawings of Rome’s temples, theatres, baths and triumphal arches. Desgodetz had noted that Serlio, Palladio, and other Renaissance treatise writers were not necessarily reliable in their details. His determination to achieve a more precise documentation of the architecture of antiquity is noted in his own words.

Desgodetz’s extensive fieldwork culminated in the 1682 publication of Les edifices antiques de Rome, dessinés et mesurés très exactement (The Ancient Buildings of Rome Very Accurately Measured and Drawn)  a monumental and beautifully illustrated work on Roman ruins that has remained reliable for the precision of its documentation to the present. In his narrative descriptions of the ruins.”