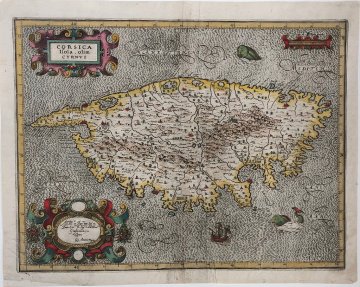 This wonderfully decorative map of Corsica, with the island oriented with north to the left, was also a important to the history of the mapping of Italy. Giovanni Antionio Magnini (1555-1617) was an academic whose interests and expertise covered a wide range of subjects from geography, astrology, astronomer and mathematical sciences but he is best known for his atlas containing detailed maps of all of Italy, L’Italia.  Giovanni completed most of the maps in the atlas but died before it could be published. His son Fabio published the work after his death.

Magini’s maps contain great topographical detail. They are said to have had important influential on the cartography of the Italian peninsula for two centuries. The style is similar in the strapwork surrounding the title and dedication, the sailing ships and sea monsters and in the geometric striation of the seas to the work of German-Flemish cartographer Gerard Mercator. Note that the size of the sea monsters greatly exceed the size of the galleon.