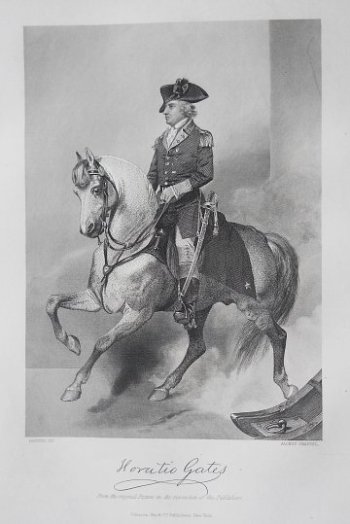 This impression is from a series of beautifully engraved portrait prints copied from the paintings of Alonzo Chappel. The text was written by Evert A. Duyckinck and the two volume work published in 1862 was entitled, National Portrait Gallery of Eminent Americans. The prints included famous American orators, statesmen, naval and military heroes, jurists and authors. Horatio Lloyd Gates was a retired British military man who volunteered his services to George Washington at the outbreak of war in 1775. As a Continental Army General, Gates was credited with the victory at Saratoga, but was always a controversial figure. He believed he was better equipped to lead and should replace George Washington, and lobbied Congress for the appointment. Steel engraving measuring10 ¾ x 8 inches, sheet. With original accompanying descriptive text. Excellent condition.