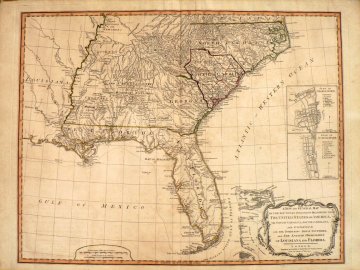 “A New and General Map of the Southern Dominions Belonging to The United States of America, viz, North Carolina, South Carolina, and Georgia: with the Bordering Indian Countries and The Spanish Possessions”

This rare map provides a detailed highly readable and important depiction of the territory belonging to the United States in 1794. It is based upon information compiled by some of the most important surveyors, mapmakers and hydrographers of the American Revolution including Romans, Collet, Mouzon. The map was first published by Romans 1776 in The American Pocket Atlas, the primary atlas carried by British officers during the Revolution. With a slightly altered title, this engraving was published by the successor to Sayer and Bennett, Laurie and Whittle, to satisfy continuing demand for the information it contained.

Published 9 years before the Louisiana Purchase, the map shows the land west of the Mississippi River and Florida as Spanish Possessions. The western border of North Carolina and Georgia remain open but South Carolina is enclosed and divided into 6 precincts. Florida is divided into East and West Florida with an accurate and detailed depiction of the coastline and the interior is left empty as unknown but for the curious inclusion of a ridge of mountains extending down the center identified as “the Great Sandy Ridge.”

The map is exceptionally valuable for its exhaustive information concerning Indian territories contributed by John Stuart, superintendent of Indian Affairs for the Southern District, to Romans.

There are inset plans of Charleston and St. Augustine. It shows early roads, town, forts, rivers, mountains, mining regions and detailed notes and observations throughout.