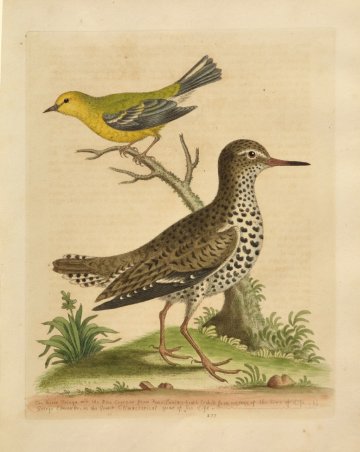 Plate 277 "The lesser Tringa and the Pine Creeper from Pensilvania [sic] both etched from nature at hte size of life, by George Edwards in the Grand Climacterical year of his Life"

George Edwards (1694-1773) was an English ornithologist and bird artist who produced a two part scientific text book titled, A Natural History of Uncommon Birds… (1743-1751) and Gleanings of Natural History, (1758-1764). This multi-volume work contained descriptions of each bird specimen and engraved and hand colored illustrations in which Edwards drew his subjects in landscape backgrounds, an innovation at the time. According to the great authority Sitwell, “At its date of issue the Natural History and Gleanings was one of the most important of all Bird Books, both as a Fine Bird Book and a work of Ornithology. It is still high on each list.” (Fine Bird Books).

Like many other prominent natural historians of his time, Edwards had close ties with noted scientists in Europe and North America with whom he exchanged specimens and information. Edwards included in his bird book, some specimens from the Carolinas provided to him by his colleague Mark Catesby, some Pennsylvania birds that he learned about through William Bartram, Philadelphia's great early naturalist, and Hudson River birds that he came to know through his friendships with Alexander Light and James Isham. The engraved compositions are terrifically charming, each bird expressing its own personality, posed with great habitat details. These cheerful engravings are wonderful examples of 18th century natural history art.

Look closely at the bottom of hte image and you will see thatouwil see that Edward's proudly etched into the plate that he was in his "Grand Climacterical Year" which means he was 63 years young!