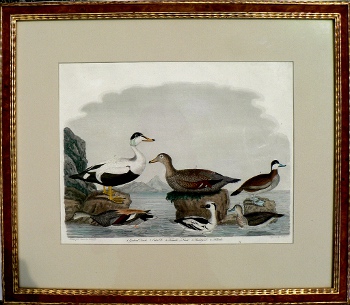 Working a quarter of a century before Audubon, Alexander Wilson (1766-1813) has come to be known as "The Father of American Ornithology." The Scottish born Wilson emigrated to the United States in 1794 and settled in Philadelphia, then an important center of American publishing. In 1802 he visited Bartram's Garden and became fascinated by the noted naturalist, his work at the Garden and natural history in general.  Wilson began sketching birds and soon decided to devote himself to the depiction of the birds of North America. He associated with members of the scientific community in Philadelphia and these connections brought him other contacts including Lewis and Clark who presented him with specimens from their western expedition and Thomas Jefferson who encouraged him in his pursuit.   Wilson died before he was able to completely realize his goal to depict all known North American birds but  American Ornithology; or, the Natural History of the Birds of the United States depicted 232 species of birds including 39 not previously recorded. It was thus of great scientific value. It was also one of the few antique scientific works that was a financial success at the time of publication.  The work contained 76 engravings by A. Lawson, G. Murray, J.G. Warnicke, and B. Tanner after Wllson's studies drawn from nature. In order to keep the cost of publication down, Wilson included as many birds on each engraved plate as he could giving his engravings a somewhat naive appearance that appeals to collectors of decoys and folkart.  Each bird is identified by a key in the title. It is the first great American colorplate work.