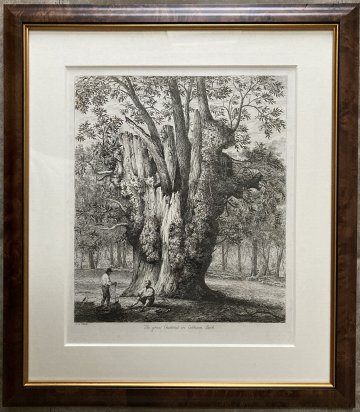 "The great Chestnut in Cobham Park"

Beautifully engraved portrait of an ancient tree by Jacob Strutt (English 1784–1867), who although a respected portrait painter, began in the 1820s to draw, paint and engrave trees. In 1822 Strutt produced a volume containing engravings of the most magnificent trees in England, titled Sylva Britannica; or, Portraits of forest trees, distinguished for their antiquity, magnitude, or beauty.

“Strutt imagined the trees in Sylva Britannica as noble remnants of a former era. He was interested in creating portraits of these trees as a record of their existence in spite of man, and as a stimulus for their preservation. In early 19th century England, there was a deep fascination with ancient and medieval history to the point where some estates would include fake ruins of castles, monasteries, and other buildings. These follies were simply symbols of an ancient time and were totally nonfunctional. Strutt took advantage of this interest in antiquities to present his engravings of some truly long-lived citizens of the British Isles, and met with a receptive, even enthusiastic, audience. Large, old trees are not simply decorating the landscape. They are not just symbols of a long-lost era. Instead, they are carbon sinks, beautiful repositories scrubbing the atmosphere of a greenhouse gas, making the planet, all the more livable in the future. Strutt's adoration of these arbor nobles indeed was well placed, inspiring us to admire these living heroes and their ongoing work for all life on Earth.”