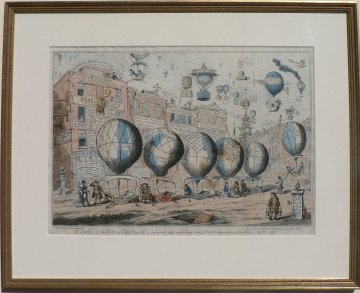 Continuing in the long tradition of British caricature, Cruickshank combined skillfully detailed drawing with wry spoken and written commentary to produce this fabulous etching. It is a colorful, endlessly entertaining and satiric take on high society and get-rich quick schemes; as familiar to us today as they were at the time the print was published. For centuries, John Bull has stood for the personification of Great Britain and England in particular. He is usually portrayed as a rotund bumbler wearing a top hat, tailcoat and light colored breeches. (He is such a familiar and lasting figure that the rock star David Bowie even dressed as him on one occasion.)

Balloons were a relatively new phenomenon at the end of the first quarter of the 19th century. By incorporating them into his cartoon Cruickshank was sure to catch the attention of his audience. Balloons quickly became the symbol of fraudulent and recklessly speculative ventures. Cruickshank shows some are deflating and one plunging to earth. Small comfort that a rotund man with a big hook sits astride a balloon marked “Royal Human Society for catching Falling Persons.” He does not appear up to or even interested in the task.

Signs and building names reinforce the artists’ outlook. They include “Air Street Gull Lane leading to the Workhouse”,  “Plan of the Proposed Voyage of Discovery to the Milkey Way well worth the attention of the London Cow-Keepers”  and “Public License Notice: The Wild Goose Chase Starts Tomorrow.”

Cruickshank had no sacred cows. He expressed his particularly jaundiced view of judges with “These premises to be disposed of – the Proprietors going to retire to the Bench.” Financiers were often the targets of his satirical wit. Office buildings are marked “Office of the Honoroble Company of Moon Rakers Capital” and “Humbug Doo & Co” is located in the “Speculation Mart.”