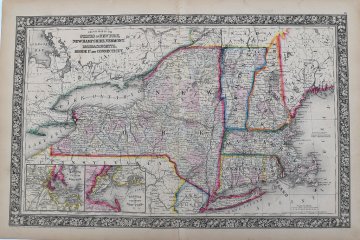 A detailed and beautifully hand colored original antique lithographed map with topographical detail and place names clearly legible. The map was included in Samuel Augustus Mitchell’s, New General Atlas, Containing Maps of The Various Countries Of The World, Plans Of Cities, Etc. Embraced In Fifty-three Quarto Maps, Forming A Series Of Eighty-four Maps And Plans, Together With Valuable Statistical Tables. The whole is surrounded by Mitchell’s signature decorative border.

Samuel Augustus Mitchell along with his son and successor S. Augustus Mitchell, Jr. were successful and prolific Philadelphia publishers. Between 1831 and 1890 general map and atlas publishing in the United States was dominated by the Mitchell family of Philadelphia and the Coltons of New York City. Mitchell's maps were lithographed and well colored and always included a decorative floral border.  Mitchell senior was a school teacher who disdained of the quality of American geography books. Vowing to publish his own, a business was born. The information on his maps was accurate and up-to-date showing changes that were occurring with American expansion in the west. They are collected today because of their attractiveness and affordability.