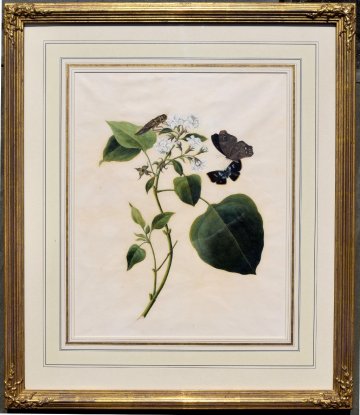 White botanical with blue butterflies (one of a pair)

“Botanical subjects were some of the very few that grew out of a native Chinese tradition. The Chinese concern for their flora had resulted in centuries of accurate representation of an infinite variety of species. The West, avid for new information on new species, especially after the impact of the Cook Voyages and others undertaken by botanists and draughstmen for the sole purpose of exploration and the furtherance of knowledge, could obtain highly accurate and wonderfully rendered examples of Chinese native plants. With their great detail and delicate colouring whether viewed as single sheets or an album of vast numbers, are certainly among the finest paintings for the export market.”