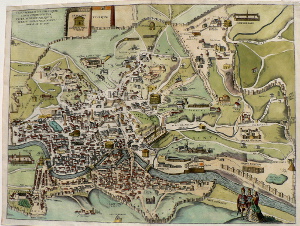 This view of Rome was included in Civitates Orbis Terrarum,  the first systematic series of city views, published in Amsterdam  between 1572 and 1617.  This great work included bird’s-eye views and map of all major cities in Europe, plus important cities in Asia, Africa, and Latin America; all the known world at that time.  Edited and annotated by theologian and publisher Georg Braun with most plates engraved by Franz Hogenberg, the Civitates was intended as a companion volume for Abraham Ortelius’s 1570 world atlas, Theatrum orbis terrarum. Over a hundred different artists and cartographers contributed to the sumptuous artwork, which not only shows the towns but also features additional elements, such as figures in local dress, ships, ox-drawn carts, courtroom scenes, and topographical details to help convey the situation, commercial power, and political importance of the towns depicted. These views provide wonderfully comprehensive views of urban life at the turn of the 17th century.

In this image, the Tiber River flows through the foreground and the ancient walls are clearly shown encircling the entire city. North is to the left. A translation of the Latin caption in the upper left reads “Layout of the city of Rome with the remains of the old monuments as they can still be seen today as drawn by Pyrrhus Ligorius of Naples, Rome 1570.” Most of the sights familiar to tourists today are drawn and identified including the Vatican at the lower left, the Pantheon, Trajan’s Column and Forum, The Colosseum, the Forum, etc. and some, such as the Circus Maximus are shown in much better preserved than they are today.